Stopping Your Way to Success 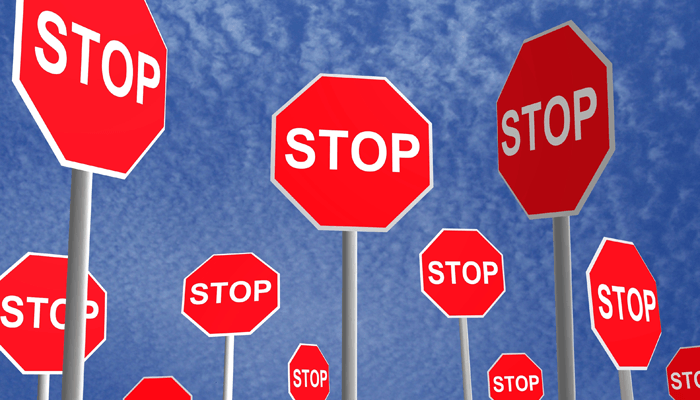 The vast majority of business leaders I know are men and women of action. They are eager to identify and address the issues confronting them, the challenges creating risk ahead and the opportunities they perceive – all in the interest of accelerating success. They want to DO SOMETHING!

I used to be the same way. I could articulate a way forward – new initiatives, new people, new structures, new markets – with the best of them. Identify an opportunity to improve, explore alternative paths forward, make a decision, and GO – that was my modus operandi.

But the more businesses I work with, the more leaders and leadership teams I see in action and the more I study executive behavior, the more convinced I am that most of these men and women of action are missing something. The right answer is not always GO. Sometimes it is STOP.

I frequently work with leadership teams in what I’ll call action planning mode. They have identified key strategic initiatives that they are eager to operationalize, so we go through a systematic action planning process to identify what needs to be done by whom and by when to launch important new initiatives. I underline the word new here because I have yet to meet the leader or leadership team that routinely answers the question “What are we going to stop doing?” before (or at least concurrently with) them launching new activities. Too bad! There is real power in this simple question.

“What are we going to stop doing?”

I’ve never worked directly with Alphabet or Amazon, who appear (at least from the outside) to have almost unlimited resources to launch new initiatives at will. In the humbler business world I occupy, my clients are always faced with managing scarce resources. They never seem to have enough capital, enough people or enough time to take advantage of every opportunity they surface.

In spite of these obvious resource constraints, I experience cognitive dissonance over and over as one client after another creates a laundry list of new initiatives – each of which undoubtedly has strong merit – without overtly addressing their finite resource problem. So here’s my suggestion.

Balance Your STARTS with Your STOPS

Before approving the launch of new initiatives, I recommend pausing and asking yourself and your team what should your organization stop doing (or, at the very least, do less of) to free up resources that you can subsequently direct to something new. This is a deceptively simple, yet potentially game-changing, step that every leader should embrace.

Everything you are currently doing has merit, you say? That’s probably true. But if you are operating in a universe with scarce and finite resources, you can’t launch something new without something else being degraded (all other things being equal). That’s simple math. So the real question for you as a decision-maker is are you going to consciously manage which of your current activities are affected by your new initiatives or are you going to leave the inevitable adjustments to chance? I suggest that the unintended consequences of this latter approach are very risky for you and your business.

It is far preferable for you to recognize that starting something new almost always involves stopping something else and to make the identification of what you want to stop doing part of your decision-making process. Just as you surface ideas for new initiatives, you should be identifying candidate activities to stop or reduce. As you make the decision to allocate resources to something new, balance this “new” by approving the cessation of something “old.” If you are being thoughtful and strategic in the approval of new initiatives, this balancing process should incrementally improve your organization’s performance over time.

As part of the process of developing strategic thinking among my clients, I never finish an action planning facilitation without asking the group (oh, I’ll be honest. I don’t ask anymore; I insist) to create and prioritize a list of candidate activities to be stopped or curtailed. The first few times I do this with a particular group, the “stop doing” list is always minuscule compared to the list of exciting new initiatives we’ve developed. But over time, the two lists come more into balance. After a while, I start overhearing hallway conversations that include folks asking each other the “What are we going to stop doing?” question. It becomes part of the decision-making culture.

Oh, the sweet taste of success!